Continental, one of the biggest sponsors of Tour de France, in cooperation with RTV SLO Multimedia Centre (MMC) and Val 202 radio station, offered two award-winners a visit of the final stage of the 106th Tour de France. A popular Slovenian former top ski jumper joined the cyclists at the end of the famous bicycle race in the official final stage ride down the Champs-Elysée … and it wasn’t Primož Roglič!

Invited by the organizers of Tour de France and Continental, Robert Kranjec, a former ski jumper and ski flyer, a huge cycling fan and a friend of Primož Roglič, participated in the final stage of the race that finished in the middle of Paris. Continental namely enabled its guests to feel the atmosphere of the race on the closed roads in the middle of Paris, in the presence of numerous supporters during the final kilometres right before the conclusion of the 106th Tour de France and to ride a couple of kilometres of the road. Soon after, the same route was ridden by the best cyclists in the world. The “Flying Kranjec”, a winner of seven world cup competitions, an Olympic bronze medal winner and a former world champion in ski flying, was having a ball riding through the centre of the capital of France.

“This was such a great experience. I could really see how it looks like when the professional cyclists arrive to Paris. A ride on the paving stones was exciting and there were incredibly huge crowds of people standing by the track and loudly cheering so this was truly amazing. I would like to thank the organizers and Continental for this opportunity and I hope that next year I will be standing right here waiting for Primož Roglič to finish the race in the yellow jersey”, he said as he crossed the finish line. 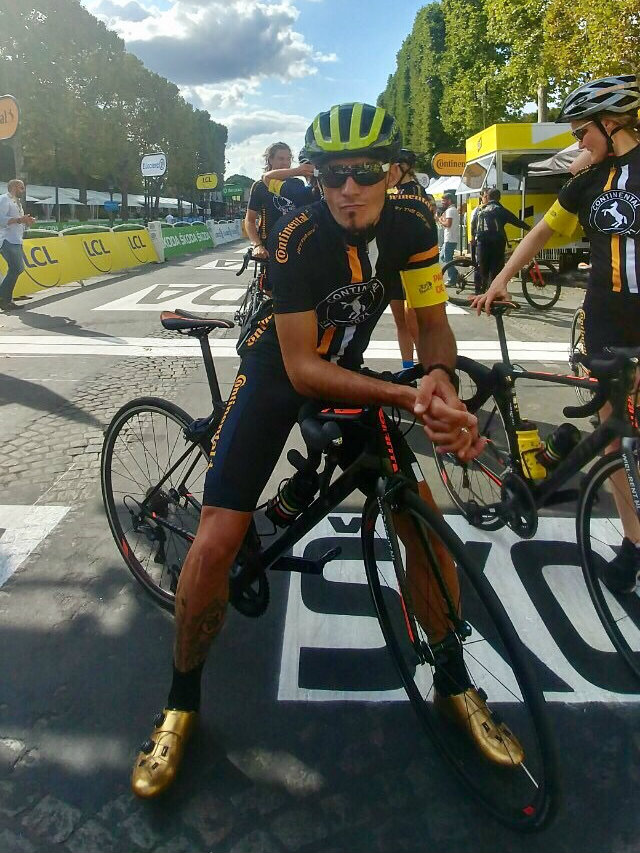 Two other special guests apart from Robert Kranjec were watching the arrival of the cyclists at the finish line. The first one was Andrej Vucej, the winner of the “Virtual Race” that took place at the RTV SLO Multimedia Centre (MMC) during the Tour of Slovenia, and a huge cyclist fan, who scored the best result among 730 competitors and won the opportunity to visit the final stage of Tour de France at the Champs-Elysée between the Place de la Concorde and the Arc de Triomphe. He said:

“I still can’t believe I was in Paris and that I was part of this spectacle. The event is organized at such a high level, and the crowds of fans and the entire experience is just … indescribable, fantastic! It all culminates when the cyclist literary “fly in” the Champs-Elysée, I’m overjoyed to have seen that with my own eyes. I will never forget this experience.”

The second guest was Tomaž Kužner, the winner of the quiz “Delimo si pot” (Share the road). The quiz was carried out by Val 202 radio station in three stages. The main purpose of the quiz was to raise the awareness about road safety and road traffic signs. Tomaž who is also a great cycling connoisseur gathered his impressions after he returned from Paris and said:

“A couple of days after watching the final stage in Paris I’m practically still reliving every moment I experienced. The organization of a race such as Tour de France is a huge logistic challenge and one can see that everything runs smoothly like a well-oiled machine and nothing is left to coincidence. The arrival of the caravan of sponsors announces that something big is about to happen and when the cyclist arrive to the Champs-Elysée everything just stops. The pressure is increasing with each round, the viewers are becoming more and more excited and the finish is the cherry on the cake. The sprint finish was phenomenal. I was fascinated by the speed at which the cyclist rode. I think they were riding faster and faster in circles and when the peloton decided to catch the breakaway group it felt as if I was watching a film. At that moment, the peloton looked really scary and I felt sorry for the breakaway group. It’s unforgettable!”